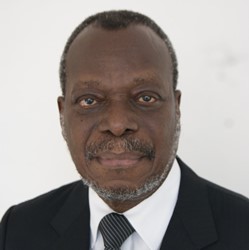 Robert S.M. DOSSOU born May 13, 1939. Former professor at the University of Paris I and then at the University of Abomey-Calavi (UAC BENIN), honorary dean of the Faculty of Law and Political Sciences of the UAC, lawyer at the Paris Bar and currently practicing at the Bar of Benin, former Chairman of the Bar, Robert DOSSOU was a Member of Parliament, Minister of Planning and then Minister for Foreign Affairs. Former President of the Constitutional Court, expert consultant, he has carried out and still carries out various missions for various international organizations: UN, AU, ECOWAS, OIF… etc. He is an arbitrator of international trade. President of the National Preparatory Committee of the National Conference of Benin, he is the author of several publications on democracy, human rights and the democratic transition. He is also associate member of the French Académie des Sciences d’Outre-Mer, Grand Officer of the National Order of Benin and Commander of the Academic Palms (France).