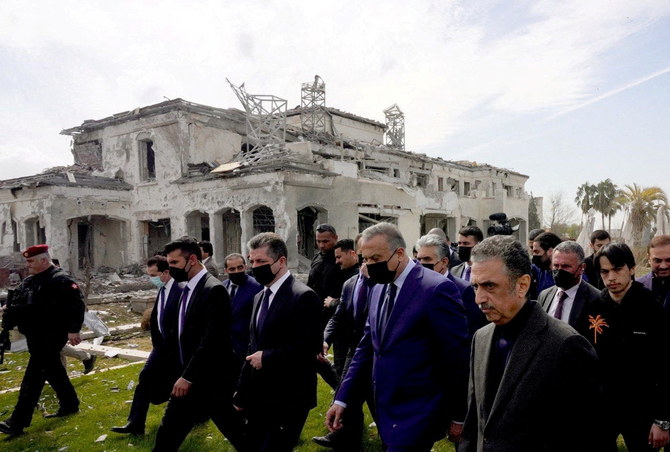 Iraqi Prime Minister Mustafa Al-Kadhimi inspects the site of a damaged building, a day after a missile attack, in Erbil, Iraq, Mar. 14, 2022. (Reuters)

Iran’s direct attack on an area near the US Consulate in Irbil on Sunday — which it claimed targeted a “strategic center for Zionist conspiracies” — sets a precedent. Iran’s Revolutionary Guards were directly involved, unlike the previous attacks on Iraq and Saudi Arabia or the more recent attacks on the UAE, for which Tehran’s proxies claimed responsibility. Does this mean that Iran is ready for a direct confrontation?
The last time Iran directly attacked a neighboring Arab country and assumed responsibility was when it retaliated for the killing of Qassem Soleimani in early 2020. It claimed that this week’s strike was a response to the deaths of two Revolutionary Guards following an Israeli strike in Syria. It also said that Iraq must not allow “third parties” to use its territory as a base to launch attacks against Iran.
Iran used to prefer making its attacks via proxies in order to escape a direct confrontation. So why carry out this act just as we are supposedly approaching the signing of a new nuclear deal? It is important to put everything in perspective. Russia has made last-minute demands that risk sabotaging the nuclear deal. Moscow can use its power to block the revival of the Joint Comprehensive Plan of Action in order to pressure the US. Hence, though America’s reentry to the JCPOA looks imminent, it might be blocked at the last minute.
Looking at the issue from the other side, the Iranians now have stronger bargaining power as the US needs their oil to make up for any potential cut on the Russian side. And, in this time of polarization between Russia and the US, Iran definitely wants to reassert its animosity toward the “Great Satan.” Despite the fact Washington is now busy with Ukraine and has less attention focused on Iran’s destabilizing activities in the region, Tehran is losing regionally and is under pressure. In Iraq, its supporters lost elections — and not because of any action or interference by the US or the Arab Gulf countries.
Iran has been its own worst enemy. It lost out in the Iraqi elections because people, particularly Shiites, realized the futility of Iran’s narrative and the fact that the Iranian project for their country and the region is utterly destructive. This means Tehran is unable to impose a new puppet prime minister on the country. While the Iranians thought Muqtada Al-Sadr would support them, they actually seem incapable of influencing him. The Iran-affiliated factions have threatened that they will resort to violence if they are not included in the ruling coalition — meaning that, if they lose control of Iraq, they will destroy what is left of the country.
Is this deja vu? In Lebanon in May 2008, after being unable to garner a parliamentary majority and hence control the government, the Iran-aligned Hezbollah took Beirut by force and imposed a new government. It worked for them then, in Lebanon, but now things are different. The entire popular mood in Iraq is against them. The strike on Irbil was a sign of Iran’s defiance and denial. Such a show of force when they are losing on the ground was nothing but a desperate attempt to prove themselves. However, this time they are not facing the “Great Satan,” the “Zionist enemy” or some imaginary scheme by Saudi Arabia, they have simply lost their grassroots base due to their own incompetence, corruption and brutality.
Meanwhile, the Iranians’ plans to intimidate neighboring countries by pushing the Houthis to target Saudi Arabia and the UAE do not seem to have been successful. Both countries have good defense systems and are able to intercept most rockets and protect themselves and their inhabitants.

Tehran has lost popular support and is frantically trying to safeguard whatever influence it can.

In Lebanon, though the elections have not yet taken place, any observer of Lebanese politics can notice the increasing opposition to the “resistance.” In Yemen, they have lost on the ground and their mostly unsuccessful strikes on the UAE are the clearest signs yet of their frustration.
Iran is acting like a wounded animal. It has lost popular support and is frantically trying to safeguard whatever influence it can. Dr. Zafer Al-Ajmi, an expert on Gulf issues, asked in his weekly podcast whether the Revolutionary Guards will attack the Gulf after Irbil. It is difficult to predict, but we cannot rule out this possibility.
One thing that is for sure is that signs of weakness coming from the US and its apparent desperation to rejoin the JCPOA will encourage Iran to pursue its destabilizing activities. The Biden administration is entirely focused on reviving the nuclear deal, while Iran has made it clear that it will not give up its “regional presence.” Hence, Iran faces minimal repercussions from the US side for its destabilizing activities, meaning it will use violence to keep whatever influence it can.
Those who rejoice that Iran’s proxies are losing across the region and are happy to see a possible obstruction to the nuclear deal should curb their enthusiasm, as the drama is not over yet. And they have to remember that an animal is most dangerous when it is wounded.

Read the original article on the site of Arab News.