Morocco’s former Foreign Minister Salaheddine Mezouar resigned from his position as head of the General Confederation of Morocco’s Enterprises. His decision was announced, Sunday, after a Foreign Ministry statement addressed his «irresponsible» comments on political development in Algeria. 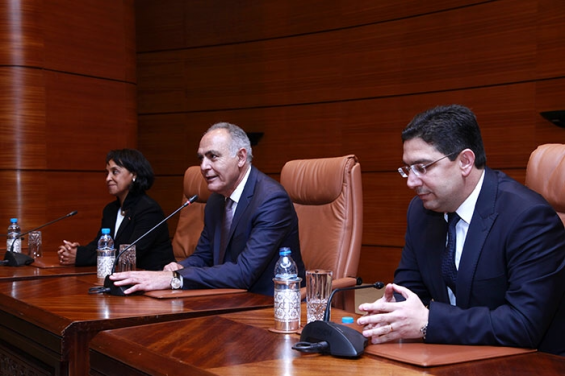 Former Foreign Affairs minister Salaheddine Mezouar resigned, Sunday, from his position as head of the General Confederation of Morocco’s Enterprises (CGEM), citing «major personal constraints» in a communiqué published on the same day. The politician did not give further details about his sudden resignation.

Mezouar’s announcement, however, came minutes after the Ministry of Foreign Affairs issued a communiqué in which it slammed the CGEM president and denounced his «irresponsible» comments on political development in Algeria.

«The government of His Majesty the King denounces the irresponsible, awkward and unthinking approach of Mr. Salaheddine Mezouar, Chairman of Morocco’s employers association (CGEM), who thought it was necessary to comment on the internal situation in Algeria at an international conference held in Marrakech», said the ministry in its press release.

Slammed by the Ministry of Foriegn Affairs over his Algeria remarks

CGEM «cannot replace the government of HM the King in taking positions on international issues and in particular the latest developments in this neighboring country», the ministry said, adding that the position of the Kingdom of Morocco on this issue is «clear and consistent».

«The Kingdom of Morocco has, indeed, decided to not interfere in political developments in Algeria. Morocco abstains from commenting on this matter», the ministry stressed.

Mezouar’s decision and that of the Ministry of Foreign Affairs come after he attended the first plenary session of the World Policy Conference, held Saturday in Marrakech. Speaking during this international conference, Mezouar commented on political development in Algeria. He praised the peaceful movement in the neighboring country and urged «the military to share power with civilians».

For the record, Salaheddine Mezouar was elected as head of CGEM in May 2018, replacing Moroccan businesswoman Miriem Bensalah-Chaqroun. Before this position, the former head of the National Rally of Independents party (RNI) served as a Foreign Minister from 2013 to 2017.

Read the article on Yabiladi