Time to reform the body, including possible expulsion of Moscow 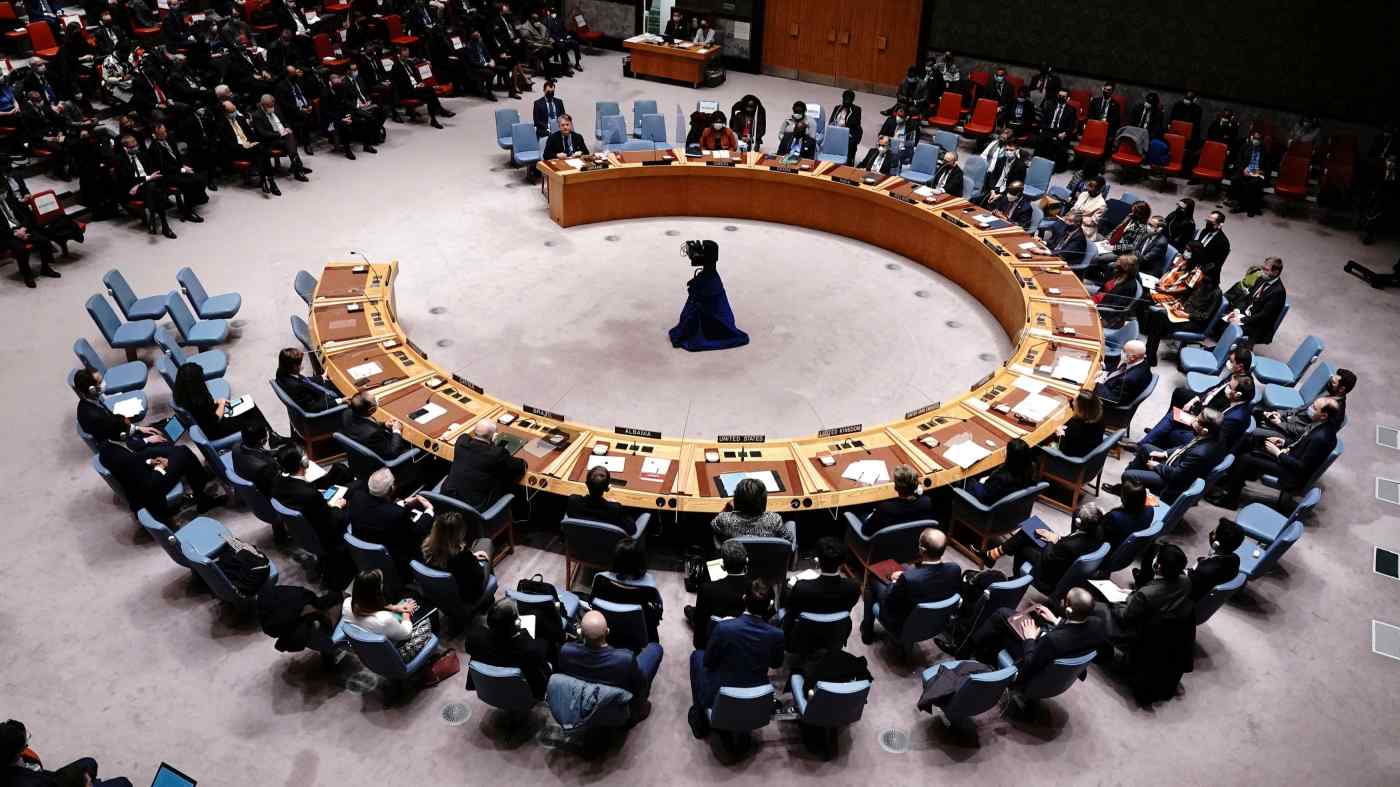 In response to Russia’s invasion of Ukraine, the United Nations Security Council held an emergency meeting on Feb. 25 but could not even adopt a resolution to condemn the act.   © Reuters
HIROYUKI AKITA, Nikkei commentator
March 17, 2022

TOKYO — Russia’s aggression against Ukraine is graphic and brutal evidence of the international community’s inability to effectively respond to events that disrupt peace. The U.N. Security Council is a distressing symbol of this paralysis.

The Security Council is supposed to play the role of « the guardian of peace » and has the authority to do so. It can decide to slap sanctions on countries threatening peace, and U.N. member countries are required to comply with its decisions.

In response to Russia’s military action against its neighbor, the Security Council held an emergency meeting on Feb. 25 but could not even adopt a resolution to condemn the act, let alone sanctions against Moscow.

Russia, which vetoed the resolution, presided over the meeting as the rotating president of the council, an almost comical situation that showed the limits of the body’s effectiveness.

The five permanent members of the council — the U.S., Britain, France, China and Russia — have veto power to kill any resolution. There is no doubt that Moscow will keep using this privilege to torpedo any draft resolution to punish it for the invasion. The impotence of the key U.N. body in the face of such a full-blown security crisis bodes ill for stability in the Asia-Pacific region. Consider the possibility of China invading Taiwan. It is all too clear that Beijing would use its veto power to prevent the council from taking any effective step to stop it.

North Korea fired missiles as many as nine times in 2022 alone. Pyongyang has also violated U.N. resolutions by firing ballistic missiles. So far this year, however, the Security Council has failed to adopt a resolution to condemn North Korea due to opposition from China and Russia.

These facts eloquently testify to the gloomy reality that the Security Council has lost its relevance. The council’s structure was created in October 1945, immediately after the end of World War II, under the leadership of the victorious U.S., Britain and the Soviet Union. China and France were also invited to join the exclusive club.

At that time, these five powers were expected to support the postwar world order. But this assumption has now collapsed completely. Russia has become a clear invader and China is more interested in bending the current order in its favor than protecting it.

The Security Council’s problem is nothing new. It did not work well during the Cold War. In 2003, the U.S., which many saw as the leader in maintaining the world order, opened a war against Iraq without a clear U.N. resolution to fully justify its action.

But the dismal performance of the council should not be used as an excuse for allowing the status quo to continue. Russia’s invasion of Ukraine, the most egregious act committed by a major power in the postwar period, should prod the world into a long-overdue move to fix the situation.

What should be done? Theoretically, there are two approaches — radical reform of the council’s structure or finding an alternative.

The former would be the orthodox way. The most desirable option is to establish certain limits to the veto power of the permanent members to prevent abuse by China or Russia.

But this would require amending the U.N. Charter, a step that must be approved by a vote of two-thirds of the U.N. General Assembly and all the permanent members of the Security Council. That means it is a tall order.

Besides China and Russia, the U.S., Britain and France are also against limiting their veto power, a highly valued privilege, though they do not say so openly, said a senior U.N. bureaucrat.

The next best option would be to increase both the permanent and nonpermanent members of the Security Council without touching the veto power of the five nations.

This could involve, for instance, giving permanent seats to some other major powers, such as Japan, Germany and India, or increasing the number of nonpermanent seats from the current 10. Advocates say this would increase pressure on China, Russia and other permanent members to refrain from abusing their power to shoot down resolutions.

The catch is that this step too would require revision of the U.N. Charter. Some countries have been calling for a major reform of the body, but Beijing and Moscow have balked even at including such calls and related discussions in official records, according to diplomatic sources at the Security Council.

A more plausible idea would be to strip Russia of its permanent member status as a way to punish it for the attack on Ukraine. Some Western democracies are moving to explore this option, according to European media.

Russia became a permanent member of the council as the successor to the Soviet Union, which collapsed in 1991. The advocates of Russia’s removal will likely try to find irregularities in the succession process that can be used as a reason to kick it out. Russian Ambassador to the United Nations Vassily Nebenzia votes during a U.N. Security Council meeting on a resolution regarding Russia’s actions toward Ukraine on Feb. 25.   © Reuters

Shinichi Kitaoka, a professor emeritus at the University of Tokyo who served as Japan’s ambassador and deputy permanent representative to the U.N. from 2004 to 2006, calls for the effective use of the General Assembly to put diplomatic pressure on the permanent members of the Security Council. « U.N. resolutions, even if they cannot produce immediate effects, can serve as a tool to demonstrate legitimacy to the international community, » he said. « In 2005, Japan, Germany, India and Brazil worked together to submit to the General Assembly a proposal to reform the Security Council to increase its membership. This is an example of how countries can use the assembly to promote changes to make it easier to put pressure on permanent members that have done something wrong. »

In addition to trying to revamp the Security Council itself, it is also vital to step up efforts to create a new system to do what the present structure cannot do. One specific idea that merits consideration is for countries that share the same values and views of freedom and the world order to forge a « coalition » to complement the functions of the council. Ryozo Kato, a former Japanese ambassador to the U.S., proposes to institutionalize the Group of Seven to ensure more solid and effective cooperation among the leading democracies to promote peace and stability.

In response to violations of international rules, the G-7 has taken joint actions such as issuing statements and imposing sanctions against the violators. However, it is only a voluntary grouping that lacks any institutional foundation.

It is crucial to « enable the G-7 to take stronger and more effective actions by establishing new principles and goals for cooperation and creating a permanent organization for its activity, » Kato said. « It would also be a good idea to expand the group by inviting other major democracies like Australia and India. Through such steps, the G-7 should become an organization that can support the proper functions of the Security Council. »

The U.N., of course, has many agencies and organizations that make important daily contributions to tackling such global challenges as sustainable development and humanitarian assistance as well as food, energy and environmental crises. But if the Security Council, which has enforcement powers, remains in tatters, there can never be stability in the world order. If Russia’s barbaric act does not lead to an overhaul of the body, the Security Council will never be able to change to become a true guardian of peace and order.

Read the original article on the site of Nikkei.