CEO Pouyanne wonders if European products can be competitive in Asia

PARIS — French energy giant Total is not yet ready to participate in the Pan-European battery project for electric vehicles, the company’s chief executive said in an interview with the Nikkei Asian Review.

CEO Patrick Pouyanne’s decision will impact the project, which seems to have chosen Total subsidiary plants for pilot production in a market increasingly dominated by Asian companies, especially Chinese.

Pouyanne stressed: « For now, we are thinking about it along with other manufacturers. Decisions are not made yet. » The interview took place at the World Policy Conference from Oct. 12-14 in Morocco.

In 2017, the European Commission launched an initiative to develop its own EV batteries by gathering European companies’ technologies. The EU, led by France and Germany, plans to kick off production in France in 2022 and in Germany in 2024. The project is expected to cost 6 billion euros ($6.66 billion), including around 1.2 billion euros in governmental subsidies. Inspired by the success of aerospace multinational Airbus, the EU has dubbed the project the « Airbus of batteries. »

French Finance Minister Bruno Le Maire announced in September that the EU was expecting to set up a pilot plant in the Nouvelle Aquitaine region in southwestern France by the end of the year. While he did not offer specifics, France is expected to use the factories of Saft, Total’s wholly owned battery-making subsidiary. Total’s prudence may force the EU to think again on the project.

The automotive battery market, which is growing around 9% annually, is dominated by a handful of Asian companies. As of 2017, the market was led by China’s CATL, with a 16% share, Japan’s Panasonic, with 15%, China’s BYD, with 10%, and South Korea’s LG Chem, with 7%, according to Tokyo-based Techno Systems Research. 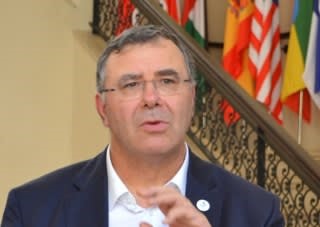 Pouyanne said it is « obvious » that China’s foothold in the market will grow in the future, helped by state support. « I believe the Chinese have used electric cars and batteries in order to take the lead of the global automotive industry, » he said.

Will the subsidies be enough to change the landscape? « We’ll see. We will answer when we will know how much they are [really] ready to give, » said Pouyanne. « The real question should not be answered by states. The real question is, ‘Do European manufacturers believe that batteries made in Europe can be competitive in China, in South Korea or in Japan?,' » he asked, hinting concern over the project.

As for the feasibility of production in 2022, Pouyanne said: « I don’t know. That’s the word of the minister. States are expressing ideas, and then it is manufacturers that must lead sustainable operations. »

Total is not alone. Germany’s Robert Bosch, the world’s biggest auto parts supplier, has already stopped producing its own EV batteries. Europeans have not forgotten the lessons of the solar panel industry, which has been taken over by Chinese players, despite considerable public support by European countries.