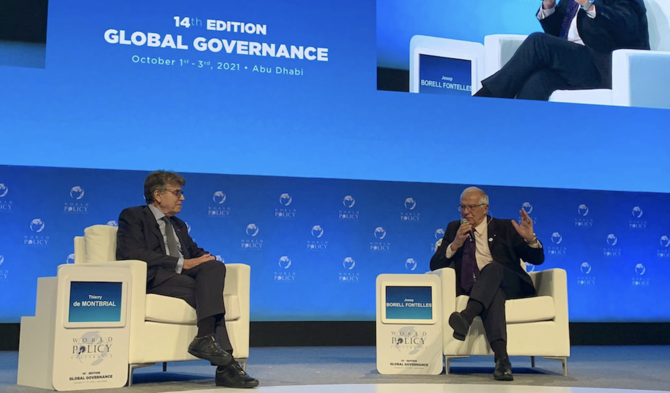 RIYADH: A trained aeronautical engineer, economist and professor of mathematics, Josep Borrell entered politics in the 1970s during Spain’s turbulent transition to democracy. Before he was appointed high representative of the European Union for foreign affairs in December 2019, he held a number of ministerial posts in the socialist governments of Felipe Gonzales.

In a blog post on Thursday, Borrell described his visit to Riyadh, with stops in Doha and Abu Dhabi, as an opportunity to explore the response to “significant political change” in “a dynamic region” and “develop new forms of cooperation” between the EU and the Gulf Cooperation Council.

Below is the full transcript of an interview he gave to Arab News on the eve of his visit.

Q: Can you tell us about the main issues on the agenda of your visit to the GCC and, in particular, your meetings with the Saudi leadership?

A: Saudi Arabia, Qatar and the UAE are very important partners for the EU. I already met or spoke to many of my counterparts from the Gulf, but this my first visit to the region as EU high representative.

My main objective is to advance the EU’s strategic cooperation with Gulf partners on global, regional and bilateral matters of common interest. This includes climate change, but also global access to vaccines and supporting the “green economy.”

I also want to stress the EU’s unwavering support for the ongoing normalization of relations within the Gulf family after a rift that lasted three long years and ended last January at the AlUla summit.

The GCC is one of our oldest partners. After more than 30 years of EU-GCC partnership, we should use the current momentum to give our cooperation a more strategic orientation.

In my meetings with Gulf partners in New York last week on the margins of the UN General Assembly, I shared my intention to convene a joint cooperation council at ministerial level early next year — during the Saudi presidency of the GCC.

My meetings in Riyadh will be an essential part of my visit. Saudi Arabia is an important actor on the global and multilateral stage, and I trust that its robust commitments at the upcoming COP26 will inspire other energy producers.

We will discuss how best to support Saudi Arabia’s domestic transformation and economic diversification, in line with the objectives of Vision 2030 and with the involvement of European companies.

With Saudi Foreign Minister Prince Faisal bin Farhan Al-Saud, I intend to sign a cooperation arrangement that reflects our mutual wish to further intensify our cooperation, and will be a useful instrument to do so.

Q: You recently met Iranian Foreign Minister Hossein Amir-Abdollahian in New York. What assurances did he give you about Iran’s compliance with the 2015 nuclear pact?

A: As coordinator of the Joint Comprehensive Plan of Action (JCPOA), I have always been clear: We must go back to full implementation of the deal, which means a return of the US into the agreement with the lifting of related US sanctions and Iran’s full compliance with its nuclear commitments.

The nuclear deal remains a key security achievement. Without it, Iran could have developed nuclear weapons by now, adding yet another source of instability to the region.

Obviously, I am concerned about the negative trajectory of Iranian nuclear activities. That is why it is crucial to resume negotiations in Vienna as soon as possible and from where we left off on June 20.

My message to Foreign Minister Amir-Abdollahian in New York City was simple: Diplomacy is the solution; let’s go back to Vienna without delay.

Q: Do you get a sense that the new Iranian government, despite its hardline reputation, wants to improve its relations with its Gulf Arab neighbors as well as the West?

A: Diplomacy offers the only real path to address the open issues in the Gulf and among neighbors. I cannot speak for the intentions of other governments, but I have noted more dialogue between countries in the region.

The Baghdad Conference (for Cooperation and Partnership) on August 28 and the bilateral talks between Saudi Arabia and Iran are such examples. These are welcome developments and I was happy to participate in the follow-up event to the conference in New York recently.

The EU is ready to support the countries in the Gulf region to build a shared sense of security and cooperation. In this sense, the (Iran) nuclear deal is also crucial.

I am still convinced that if we do manage to preserve the JCPOA and ensure its full implementation, it can become a stepping stone toward addressing other shared concerns, including those related to regional security.

Q: AUKUS — the recently formed trilateral security pact between Australia, the UK and the US — was badly received by some in the EU. How could it have been handled better?

Since the announcement of AUKUS, we have talked to our US partners. I had a good meeting with US Secretary of State Antony Blinken last month in New York City.

We now consider this situation clarified. Proof of this is the joint statement between (French) President (Emmanuel) Macron and US President (Joe) Biden, in which the US acknowledged that the situation would have benefited from open consultations among allies. 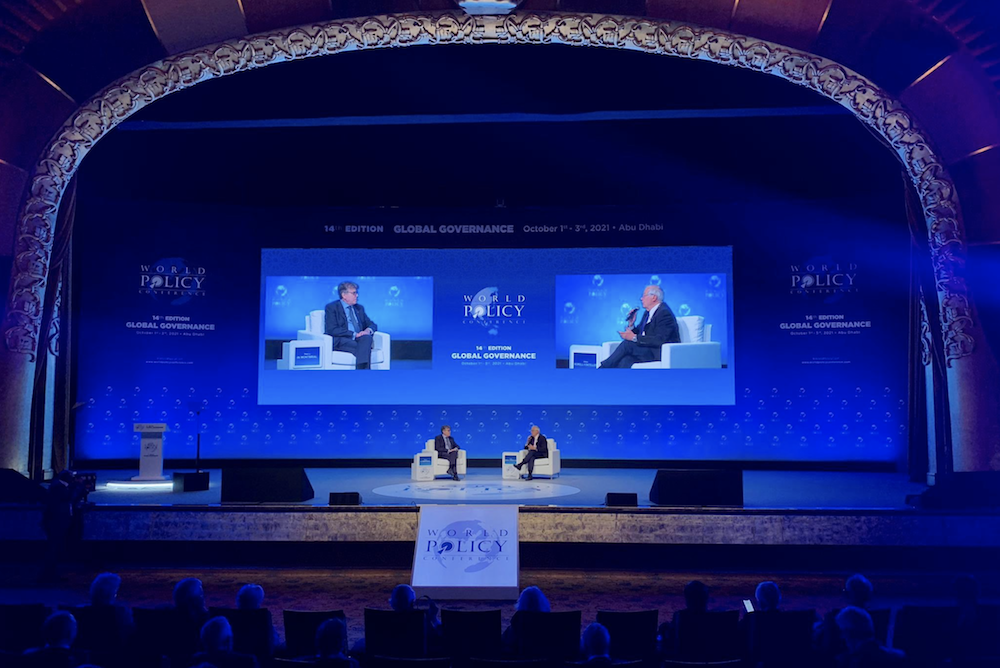 Josep Borrell used a blog post to describe his visit to Riyadh, with stops in Doha and Abu Dhabi for the World Policy Conference (pictured). (Supplied)

We now have to move forward. The EU and the US cannot afford to be divided. We are unique partners working side by side on many important global topics such as health and climate change, working for our democracies.

These recent events also clearly underline the strength of European unity and remind us once again of the need to reflect on how to build, strengthen and advance European strategic autonomy.

Europe must be more united in terms of security and defense. If the European Union pooled its defense capabilities, and avoided overlaps, we would be a lot more efficient in many of the world’s crises.

Q: The chaotic military withdrawal from Afghanistan has created an image of the West as uncoordinated, divided and unreliable. Do you think the solution lies in higher European defense spending instead of continued reliance on American firepower?

A: It is not a question of choosing one or the other, but, certainly, Afghanistan has shown in a striking way that deficiencies in EU capacity to act autonomously come at a price.

I want to be clear: Acting autonomously does not equal moving away from our transatlantic partnership. On the contrary, a stronger European Union in defense means a stronger partner for the US and for NATO. It means being more capable of acting together with partners wherever possible, and alone when necessary if our interests and values we stand for are at stake. The only way forward is to combine our forces and strengthen not only our capabilities, but also our will to act.

During his interview with Arab News, Borrell said Saudi Arabia remains an important actor on the global and multilateral stage. (AFP/File Photo)

This means enhancing our capacity to respond to hybrid challenges, covering key capability gaps, including logistic transport, raising the level of readiness through joint military training and developing new tools.

We have discussed these kinds of proposals for many years. I hope that, paired with recent developments, this will create enough common understanding of the challenges and threats we are facing to mobilize the common will of the member states.

Q: You have said there is still ‘a wide demand and compelling need for Europe to speak up and back up its positions with the instruments and forms of leverage we have.’ Has such an approach worked in Libya, for instance? Will it work with the Taliban?

A: Libya and Afghanistan are very different. With regard to Libya, the EU and its member states agree on the need to hold elections on December 24 and to implement the ceasefire agreement, including the withdrawal of all foreign forces. To this end, we have aligned a number of instruments, including technical support for elections and civilian missions in support of the ceasefire agreement and to implement the arms embargo.

Afghanistan finds itself at a crossroads after decades of conflict. We have to provide strong support to the Afghan people, including those present in the region. EU countries have set clear conditions that will determine the level of engagement with the Taliban. Talks with the Taliban are necessary to prevent a humanitarian tragedy and assist in the protection of the vulnerable.

Those talks do not equal recognition. This will be an operational engagement and how much we engage will depend on the behavior of this caretaker government.

Q: Do you think the EU and the GCC are more or less on the same page on the major Middle Eastern and Central Asian issues of the day — from Iran and Middle Eastern refugees to Yemen and Afghanistan?

A: I think we all are interested in the stability, security and well-being of our own citizens and our neighbors. This should be a common objective of all our efforts and cooperation.

When it comes to Yemen, the international community, including the GCC, is unanimous: We want to see an end to the fighting and to the suffering of the Yemeni people. I will engage thoroughly on Yemen during my (Riyadh) visit.

On Afghanistan there is a broad international consensus that the country cannot become an exporter of instability, terrorism and migration flows. And it is the countries in the region who are affected first by any negative spillover of the situation (in Afghanistan).

This is why the EU tries to engage and coordinate its engagement and activities with partners in affected regions. Big challenges can be effectively and sustainably solved only by joint efforts.

Read the article on Arab News