Thierry de Montbrial is Executive Chairman of the French Institute of International Relations (Ifri), which he founded in 1979. He is Professor Emeritus at the Conservatoire National des Arts et Métiers. In 2008, he launched the World Policy Conference. He has been a member of the Académie des Sciences Morales et Politiques of the Institut de France since 1992, and is a member of a number of foreign academies. He serves on the board or advisory board of a number of international institutions.

Thierry de Montbrial chaired the Department of Economics at the Ecole Polytechnique from 1974 to 1992. He was the first Chairman of the Foundation for Strategic Research (1993- 2001). Entrusted with the creation of the Policy Planning Staff (Centre d’analyse et de prévision) at the French Ministry of Foreign Affairs, he was its first Director (1973-1979).

He has authored more than twenty books, several of them translated in various languages, including Action and Reaction in the World System – The Dynamics of Economic and Political Power (UBC Press, Vancouver, Toronto, 2013) and Living in Troubled Times, A New Political Era (World Scientific, 2018). He is a Grand Officer of the Légion d’honneur, Grand Officer of the Ordre National du Mérite. He has been awarded the Order of the Rising Sun – Gold and Silver Star, Japan (2009), Commander of the Order of Merit of the Federal Republic of Germany (2016) and other state honors by the French and several foreign governments. Thierry de Montbrial is a graduate of the Ecole Polytechnique and the Ecole des Mines, and received a PhD in Mathematical Economics from the University of California at Berkeley. 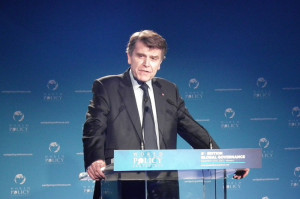