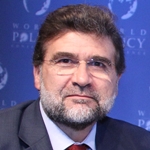 International correspondent and TV host, currently working for France Télévisions in Paris, he was TF1 French TV correspondent and bureau chief in the United States (1993-2002) and in Moscow (1986-1993). One of the founders and members of the board of France 24 TV, the French International News Channel, he has been anchor and executive producer of the show “The Talk of Paris”. He was Director in charge of national news at France 3 Televisions, France Télévisions Group. He is a graduate of the Lille Journalism School and author of “The Hillary Clinton Complex,” 1996, Editions Lattes, Paris; “The Secret Story of a Coup d’Etat,” 1991, Editions Lattes, Paris.