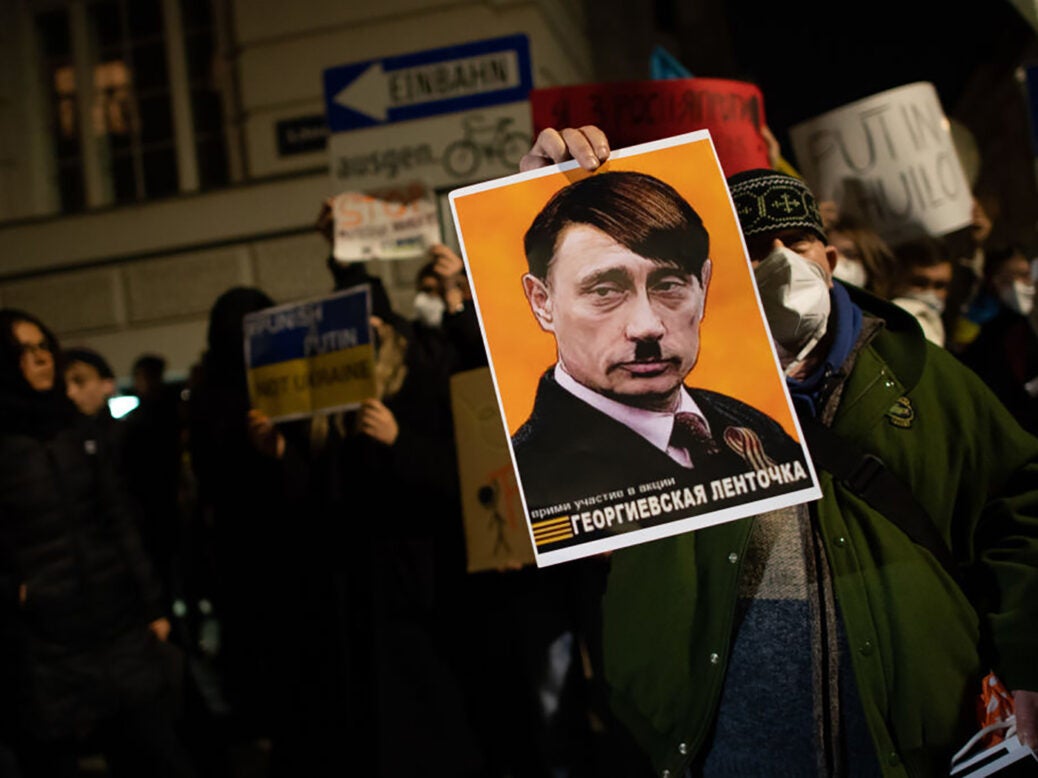 Protesters against the war in Ukraine outside the Russian embassy in Vienna. Photo by Thomas Kronsteiner/Getty Images

Russia has proposed during peace negotiations that Ukraine commit to neutrality, just as the war has led other European states to question its merits. Majorities in Finland and in Sweden now support Nato membership. “There is no way back to a past of illusory neutrality,” the former Swedish foreign minister Carl Bildt has argued. “The choice now is between remaining in a slightly uncertain in-between or recognising a new reality and taking the step into full [Nato] membership.” Austrians too are thinking about their neutrality in a Europe forever changed by Russia’s invasion of Ukraine.

Austrian neutrality, like Finland’s, is a product of the Cold War. When, in April 1955, a delegation led by the chancellor, Julius Raab, flew to Moscow to negotiate an end to the Allied occupation of Austria, neutrality was the price his government had to pay. On 25 October 1955 the last Allied troops left Austrian soil; a day later the country’s parliament enacted the Declaration of Neutrality, committing Austria to “perpetual neutrality” and preventing the country from joining “military alliances”. Ten years later 26 October was declared Austria’s national day. Neutrality became integral to Austria’s perception of itself as an “island of bliss” — as Pope Paul VI described it to the Austrian president, Franz Jonas, in 1971 — and a bridge between East and West. After the Cold War Austria joined the EU along with Sweden and Finland in 1995. While those two countries are now Nato “enhanced opportunity partners” — the closest relationship short of membership — Austria remains on the periphery of the alliance as part of the larger, looser Partnership for Peace. Austrian military operations abroad have been limited to peacekeeping missions in the Golan Heights, Lebanon and the Balkans.

Nato membership does have its supporters in Austria, in particular on the centre-right, and their position has been invigorated by Russia’s war against Ukraine. Andreas Khol, a grandee of the conservative People’s Party and its presidential candidate in 2016, argued in a recent op-ed that the Ukrainian case showed how “a neutral or non-aligned state stands alone when it is attacked. No one would rush to its aid”. Only those who are part of a military alliance would be protected in the end, he said. Austria “must choose between Nato membership or co-operation with an EU army”.Yet even in a changing Europe, Khol’s support for Nato membership remains a niche opinion. Three quarters of Austrians support neutrality, and over 80 per cent are opposed to Nato membership. Austria has come out firmly in support of Ukraine and against the Russian invasion, but in contrast to Sweden and Finland its leadership has been quick to shut down any discussion of abandoning neutrality. The chancellor, Karl Nehammer, of the People’s Party, recently put it like this: “Austria was neutral, Austria is neutral and Austria will also remain neutral.”

Support for neutrality spans the political spectrum. “Neutrality has no expiration date,” Pamela Rendi-Wagner, leader of the Social Democratic Party, wrote in response to Khol, “and it has offered Austria security for 67 years.” Challenging Khol’s view that staying out of Nato leaves neutral states exposed, Rendi-Wagner argued that neutrality prevented countries like Austria from being sucked into conflicts between military alliances as the United States, Russia and China compete to preserve or expand their spheres of influence. “Neutral states do not represent a threat to great powers,” she concluded, “and that strengthens our security.”

Read the original article on the site of the New Statesman.