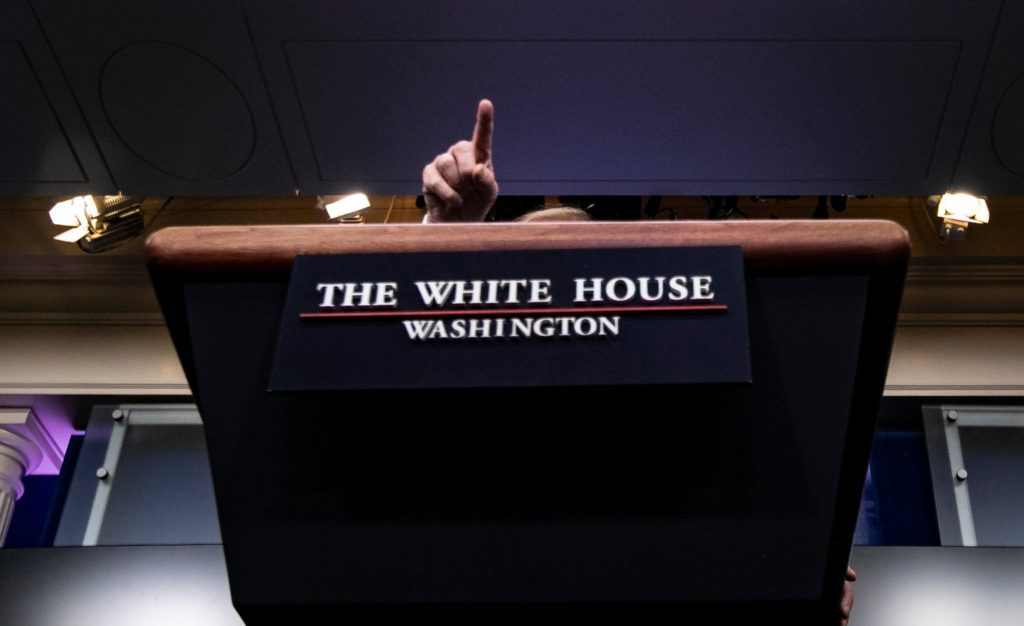 Despotism and Democracy in the Age of the Virus

The battle for humanity and solidarity in the post-American world.

The first major crisis of the post-American world is ugly and is going to get worse. A pandemic required a pan-planet reaction. Instead it found Pangloss in the White House blowing smoke and insisting, as disaster loomed, that it was still the best of all possible worlds in America.

“There’s not been even a hint of an aspiration of American leadership,” Carl Bildt, the former Swedish prime minister, told me. “That is fundamentally new.”

It is. The world’s American reference point has vanished. The prize for greatest disappearing act of the coronavirus crisis goes to Mike Pompeo, the American secretary of state.

Into the global vacuum has stepped, well, nobody. No amount of flag-waving Chinese officials disembarking from planes onto European soil with offers of masks and ventilators can obscure the fact that all this began with a biological Chernobyl in Wuhan, covered up for weeks as a result of the terror that is the currency of dictatorships.

The Asian powers that have emerged best from this disaster are the medium-size democracies of South Korea and Taiwan. The great competition of despots and democrats for the upper hand in the 21st century is still open.

The Great Depression that began in 1929 produced two distinct results on either side of the Atlantic. In the United States, it led, beginning in 1933, to Roosevelt’s New Deal. In Europe, it led to Hitler’s rise to power in the same year, the spread of fascism, and eventually devastation on an unimaginable scale.

This time, as the coronavirus stops production and leaves more than 26 million Americans newly unemployed while in Europe it causes salaries to be “nationalized,” in the words of Emmanuel Macron, the French president, the effects of an economic collapse not seen in almost a century may be flipped.

Awash in Trump’s lies, battered by the virus, buried in incompetence, lacerated by division and ruled by a lunatic unbound, the country approaches an election in November whose theft, subversion or postponement are credible scenarios. Nothing in Trump’s psyche allows him to conceive of defeat, his family’s prospects out of power are dim and crisis is the perfect pretext for a power grab. War — and this pandemic has similarities to one — fosters “executive aggrandizement,” as James Madison warned.

Trump embodies the personal and societal collapse he is so skilled in exploiting. Insult the press. Discredit independent judges. Remove the checks. Upend the balances. Abolish truth. Pocket the system step by step. Mainline Lysol. Dictatorship 101.

Europe is a different story. Its division between the prosperous north and the poorer south sharpened by the pandemic, and its fracture line between the democracies of Western Europe and the illiberal or authoritarian systems of Poland and Hungary further exposed, the continent faces a severe test of its capacity for unity and solidarity. It has underperformed, but I would not write it off.

The initial European reaction to the pandemic was weak — Lombardy will not soon forget its abandonment — and the European Union’s response to the March 30 assertion of near-total autocratic power by the Hungarian leader, Viktor Orban, was pathetic, equivalent to appeasement.

For the Union to commit to providing billions of dollars in aid to Hungary through the Corona Response Investment Initiative on the very day Orban began ruling by decree for an indefinite period was “mad, bad and dangerous,” as Jacques Rupnik, a French political scientist, told me. Orban is a politician Trump admires.

But in Angela Merkel, the German chancellor, Europe has again discovered a leader inspiring in her candor and sanity and steadiness. Cometh the hour, cometh the woman.

European societies, with their buffering welfare states that are covering the wages of laid-off workers and providing universal health care, are better prepared than the United States for a disaster on this scale. Governments and the European Central Bank have now mobilized massive resources.

Macron, in an interview with The Financial Times, has made the argument that the virus should ultimately reinforce multilateralism and herald the return of the “human” over the “economic” — or, roughly interpreted, European solidarity over American unfettered capitalism.

Certainly, the underpaid first responders, garbage collectors, farm workers, truckers, supermarket cashiers, delivery people and the rest who have kept people alive and fed while the affluent took to the hills or the beaches have delivered a powerful lesson in the need for greater equity and a different form of globalization. People suffocate from Covid-19. They may also suffocate one day, as Macron pointed out, from an overheated, overexploited planet. Whether the lesson will be heeded through a radical rebalancing, both personal and corporate, is another story.

What is clear is that if the European Union does not stand up for liberal democratic values, those values will be orphaned in the menacing world of Trump, Putin and Xi Jinping.

I said the great 21st century democracy-dictatorship battle is far from over. Emergencies serve autocrats but can also demonstrate the failings of their systems and provoke radical rethinking.

The pivotal date in the struggle is now Nov. 3. If Trump wins, assuming the election is held, and Pangloss continues his assault on truth, the Merkel-Macron democratic camp will struggle. If Joe Biden, the presumptive Democratic nominee, wins, the United States will not recover an American-led world, because that world is gone forever, but the return of American decency and principle will make an enormous difference. To begin with, autocrats will no longer have an American carte blanche.

“The virus is attacking an incoherent, deglobalized world,” Bildt said. “And as long as that is the case, the virus wins.”

Read the article on The New York Times.