Singaporean philosopher, former diplomat and academic Professor Kishore Mahbubani has warned the world is entering a global “Asian new order” and he has called on researchers in the Asia-Pacific region to shed Western dominance of the social sciences.

Speaking as a keynote at the Symposium on Social Science 2020 in Indonesia this week, Dr Mahbubani, author of the recent book Has China Won? The Chinese challenge to American Primacy, told more than 200 participants on the webinar that Asian “mental maps” needed to change to address the new reality. 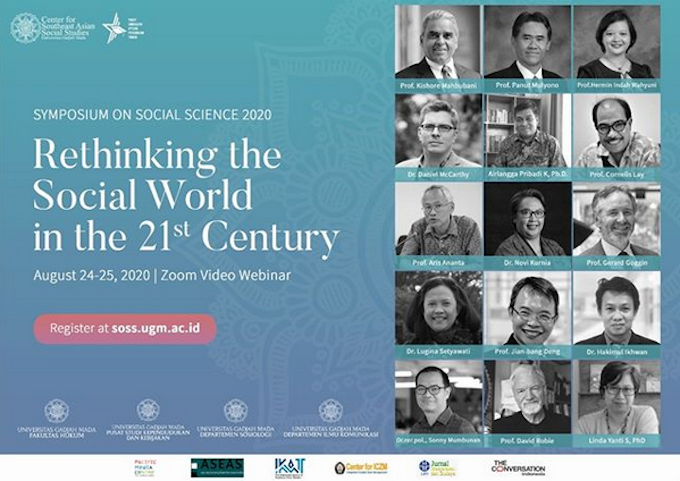 “The world has changed fundamentally – we must understand that,” he said. “But our problem is that the mental maps that we have to understand this new world, our mental maps given to us by our 19th century, 20th century [social scientists] – mostly Western – cannot guide us in the 21st century.”

This was because the current century would be far different from the two previous centuries, said Dr Mahbubani, a member of the Asia Research Institute.

“What I have tried to do in my writing is to provide a glimpse of what the 21st century will be like.

“And I have also tried to explain why this is relevant to those studying social science.”

As well as his books, Professor Mahbubani has published extensively in leading journals and newspapers overseas such as Foreign Affairs, the National Interest, The New York Times and The Wall Street Journal.

“A shift of power to Asia [is taking place] and the 21st century will be the Century of Asia. We need to be very clear about that. There is absolutely no doubt,” he said.

This was not surprising, he said, because for 18 centuries of the past 2000 years, the world had been dominated by two Asia economies – China and India.

“All aberrations come to a natural end. So it is only natural to see the return of Asia.”

The covid-19 coronavirus pandemic was hastening the world change, partly because the most competent countries in dealing with the global crisis had been in East Asia, he said, echoing what he told BBC Hardtalk’s Zeinab Badawi recently.

He said then that the number of deaths per million in East Asia was less than 10 compared to Europe and the US where it was in the hundreds.

‘Top three out of four in Asia’
“Even today, in terms of purchasing power as a measurement, if you look at the top four economies: number one is China, number two is the United States of America, number three is India, and number four is Japan.

“So three out of the top four economies are already Asian.”

Professor Mahbubani also told the live video symposium participants, hosted by the Centre for Southeast Asian Social Studies at the Universitas Gadjah Mada in Yogyakarta, that Indonesia would be a “big beneficiary” of this global change.

These were the big changes coming, but the world was still outdated with mind maps being set in the 19th and 20th centuries.

‘Dangerous’ to rely on West
“It is dangerous for us to depend on Western social science to understand the Asian century,” he said.

Professor Mahbubani was critical of the double standards in the United States over corruption when it was illegal for American businessmen to bribe foreign legislators while it remained legal for businessmen to influence lawmakers at home, especially over the privatised health system.

He said he believed that the US had lost its moral compass and its current failure under President Donald Trump to stem the coronavirus pandemic and to deal constructively with China and other countries was a warning to the world.

The country was no longer a democracy, it was a plutocracy.

Climate change was an event greater issue than covid facing the globe.

Professor Mahbubani said the world needed a strong US to balance China.

The stimulating two-day webinar had speakers and research papers from all over Asia, but also included foreign presenters such as Australia’s Dr Daniel McCarthy of the University of Melbourne on “another face of power” and New Zealand’s Professor David Robie of Auckland University Technology on climate change and covid-19 – “redefining the relations between humankind and the environment”.

Selected papers will be published in a book to follow the publication from the first Social Science Symposium in 2018.

The Pacific Media Centre was a partner of Indonesia’s Centre for Southeast Asian Social Studies for this symposium.

Find the article on the website of the Asia Pacific Report