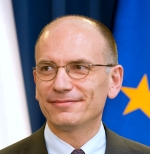 Dean of the Paris School of International Affairs (PSIA) at Sciences Po in Paris. President of the Jacques Delors Institute. He was the Prime Minister of Italy from April 2013 to February 2014. He previously served as Minister for EU Affairs (1998-1999), as Minister for Industry, Commerce and Crafts and Foreign Trade (2000-2001), among others, and as Undersecretary of State to the Prime Minister Romano Prodi (2006-2008). He was Member of the Italian Parliament (2001-2015), excluding between 2004 and 2006 when he was Member of the European Parliament. He also served as deputy Secretary of the Democratic Party (2009-2013). He graduated in International Law at the University of Pisa (his hometown) and obtained a PhD in European Union Law at the School for Advanced Studies “Sant’Anna” of Pisa.