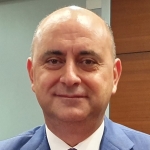 Mr. Comanescu established Grup Servicii Petroliere in 2004 and has served as President of the Board ever since. Mr. Comanescu has a degree in Naval Electromechanical Engineering from the “Mircea cel Batran” Naval Academy, Constanta, Romania. In 1995, he established the first oil service trading company, involved in oilfield equipment and spare parts supply. He has held executive positions in various companies activating in the oil & gas industry. Presently, he serves as President of GSP Holding, an integrated group of companies with activities in offshore drilling and construction, engineering, shipping, logistics, aviation and training. Since 2009, he has maintained a constant presence on the “Wealthiest Romanians” list according to Capital and Forbes magazines. In 2015, he ranked the 4th place in Forbes 500.