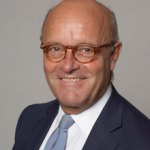 Ambassador of Sweden to France and to the Principality of Monaco. He served as Economic and Financial Advisor to the Swedish delegation at the OECD in Paris (1980-1983). He was appointed Deputy Minister, Ministry of Finance in 1988, then Deputy Minister for European Affairs, Ministry of Foreign Affairs in 1994 and Ambassador and Permanent Representative of Sweden to the European Union in 1999. In 2002, he was appointed Minister in charge of International Economic Affairs and Financial Markets, Ministry of Finance. He also held the position of Ambassador to the United States (2005-2007). He graduated from the Universities of Uppsala and Stockholm and Columbia University.