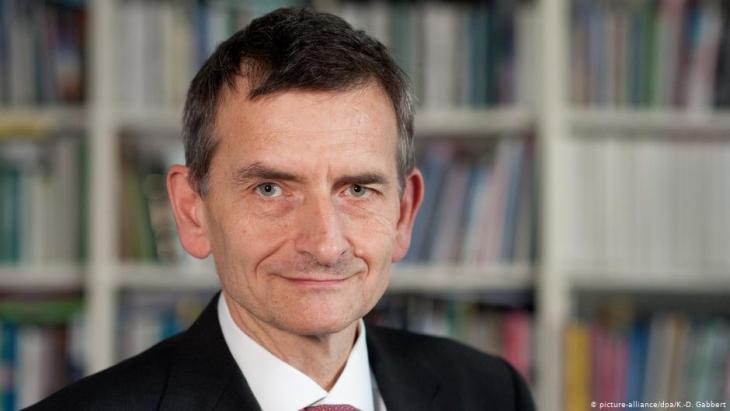 “Iran will not negotiate its own surrender”

Political scientist Volker Perthes on the American strategy in the nuclear row with Iran, the prospects for a regime change and the question of whether Europe can still salvage the deal. Interview by Paul-Anton Kruger

The Europeans have rejected the ultimatum from Iranian President Hassan Rohani, giving them 60 days to implement their promises to protect Iran from U.S. sanctions. Brussels says if Iran is no longer willing to honour to its commitments, EU sanctions will also be inevitable. Is this the beginning of the end of the nuclear deal?

Volker Perthes: It does rather look as if the American government has managed to ruin the nuclear deal. The Europeans and also the Russians and the Chinese have tried to uphold it. It must also be said: the Iranians have also tried to uphold it and fulfilled their obligations. But the moment Iran starts reneging on particular commitments in relation to its nuclear programme, the agreement is no longer of interest to the Europeans.

Iran has accused the Europeans of not fulfilling their obligations to facilitate economic advantages for the country. Could the EU then fulfil these demands if it wanted to?

Perthes: The EU can do what it’s already started doing: it can tell businesses that European companies are not obliged or allowed to adhere to American sanctions. Unfortunately, however, this has no effect. They can say that it doesn’t sanction imports from Iran and allows banks to finance them. But it can’t force businesses to do this. The EU doesn’t have the means to do what the Iranians are hoping for, namely, secure their oil exports.

What the EU is working on is Instex, a kind of exchange mechanism aimed at facilitating trade with Iran without the need for transactions in U.S. dollars or Euros. But there is little hope that many companies will use this channel. The Americans will regard it as a bypassing of their sanctions and take the same action against participating companies as they would if these had purchased oil directly in Iran. In all of this it is absolutely essential that London, Paris and Berlin continue to represent a common stance. This also includes making it very clear to the U.S. that a policy that forces Iran out of the nuclear deal flies in the face of European interests.

But that also means that the American strategy of gradually hollowing out the nuclear deal and forcing Iran into a corner is working pretty well.

Perthes: Yes, unfortunately that is the case. The American strategy has paid off. And all that’s left for the EU are measures, to which the Iranians then say: those are just words. Not that words aren’t important. The Europeans could turn up the volume a little and explain to the Americans that they believe U.S. policy is nonsensical and dangerous and that it is important for us to maintain this deal, even though elsewhere we view Iranian policy just as critically as the United States. 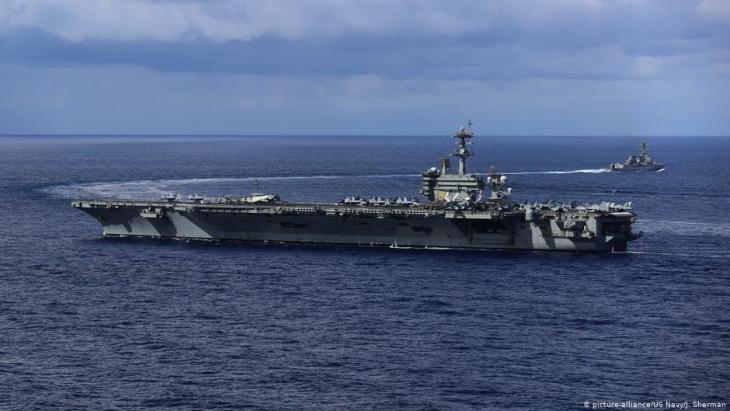 Impending military escalation? A few days ago, the Pentagon moved the aircraft carrier USS Abraham Lincoln and a bomber squadron closer to Iran, arguing that it had indications that the country could attack U.S. troops. In addition, the American administration announced the relocation of the USS Arlington and a patriot system to the region

If Iran loses its oil revenues and can no longer import consumer goods, this will result in significant economic and social upheaval in Iran, of the kind that cannot be in our interests.

The U.S. government says the sanctions are proving effective. They have meant that Iran has had to reduce its defence budget and that of the Revolutionary Guard, and that militias and allies controlled by Iran are now receiving less money. Does Trump have greater leverage to force Iran to give in?

Perthes: Washington has greater leverage and is indeed managing to restrict the flow of money into Iran and thereby limit the government’s room for financial manoeuvre. Of that there is no doubt. The question is whether this will actually result in a change in behaviour – for example Iran seeking talks with the United States. Iran will not negotiate its own surrender. I donʹt believe the Americans will succeed in persuading Iran to fundamentally change its policy and the nature of its regime, by responding for example to the twelve demands formulated by Secretary of State Mike Pompeo.

Read the article on Qantara