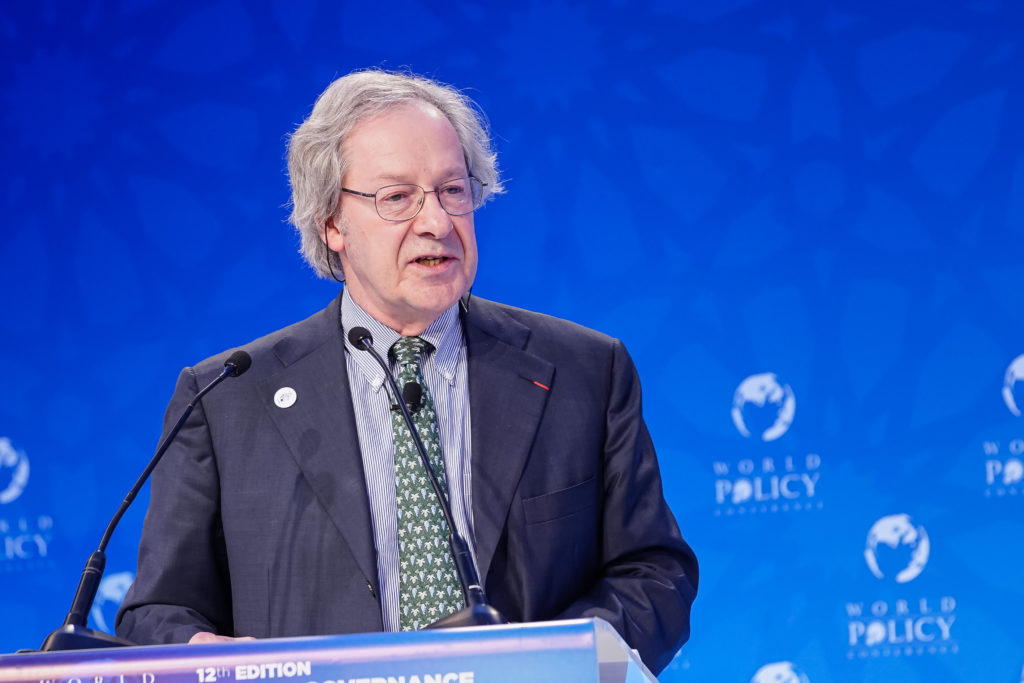 Angela Merkel has been the German chancellor for 15 years. Forging European consensus on a bitterly disputed recovery fund could burnish an uneven record. 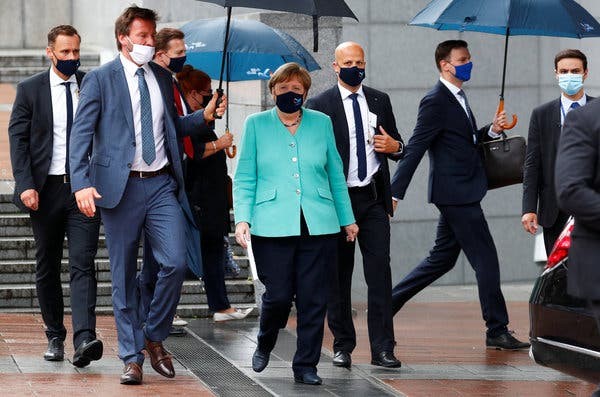 Chancellor Angela Merkel in Brussels last week. Over 15 years in office, she has consistently sought that sweet spot where German and European interests align. Credit…Francois Lenoir/Reuters

BRUSSELS — Finishing her 15th year as chancellor of Germany, Angela Merkel, the European Union’s longest-serving and most respected leader, now has her last, best chance to shape the future of the bloc and her own legacy.

With her long reign winding down, she and Germany have assumed the E.U.’s rotating presidency, which lasts through the end of the year, at a moment when the bloc is badly divided over a coronavirus recovery plan, a new seven-year budget and threats to the rule of law in eastern member states.

Ms. Merkel faces her first big test on Friday, when she and other leaders are to convene their first in-person summit meeting in Brussels since the coronavirus outbreak took hold in Europe five months ago. With a sense of urgency, they will try to hash out a consensus on how best to help European nations clobbered by the virus.

Expectations for Ms. Merkel’s leadership are high. But while this may be her last rodeo, many expect the same cautious pragmatism and reluctance to take bold, transformative steps that have characterized her time in office and her response to past European crises.

As a politician, Ms. Merkel, soon to be 66, remains, as ever, deliberately opaque, allowing many to imagine her support for their own preferred outcomes. But as much as she is committed to the European Union, she has consistently sought that sweet spot where German and European interests align, guided by German public opinion and her own careful personality.

That, as much as anything, led her to break new ground with France by backing pooled debt among E.U. members to stave off the economic crash of the pandemic — what she last week called “the greatest test the European Union has ever faced.”

The proposal — grants worth 500 billion euros, or about $570 billion, for regions hit hardest by the pandemic — represented a reversal of the fierce German opposition to collective European debt. 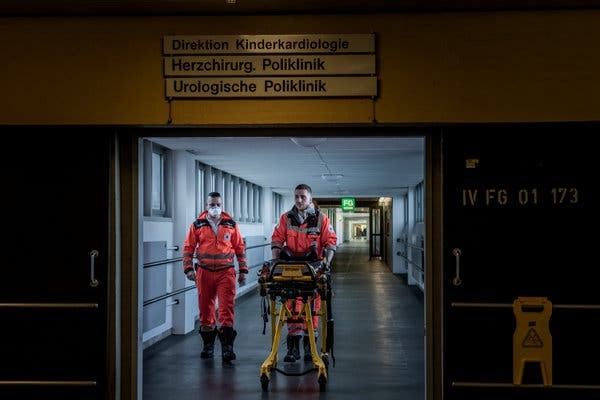 A Munich hospital in April. Ms. Merkel has been generally praised for her response to the coronavirus outbreak.Credit…Laetitia Vancon for The New York Times

Some hailed her move as a sea change, one that would seal her legacy as a Europeanist, much as Helmut Kohl is remembered for his support of the euro currency.

But others are skeptical, instead seeing a unique and typically pragmatic response to a crisis that threatened the European single market and thus the German economy.

Ms. Merkel, who tends to say what she means, has made it clear that such largess was a “one-off.” 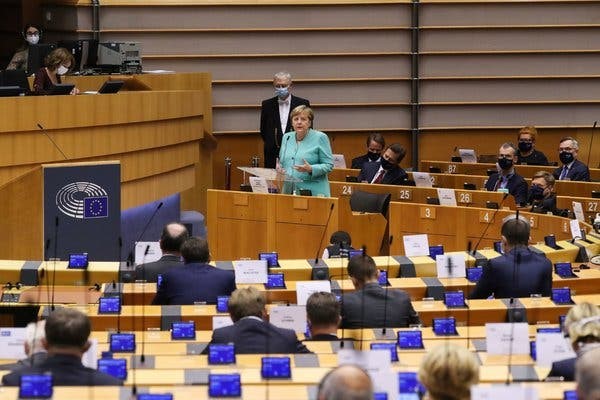 “Germany has moved a lot,” said Daniela Schwarzer, the director of the German Council on Foreign Relations in Berlin. “Germans were always ready in the presidency to put a bit more on the table, but without the virus, there would have been no revolution in the budget.”

Ulrich Speck, a senior fellow at the German Marshall Fund in Berlin, said that Ms. Merkel remained true to herself, and that she was shifting only because Germans, deeply embedded in the European Union, want to help those ravaged by the pandemic, especially in Italy and Spain.

“For her, this does not really change the European Union, and public opinion is behind it,” Mr. Speck said. “This is not controversial; this is crisis management. What would be controversial would be a permanent change of structure.”

But others, especially European federalists in France and Italy, dare to believe Ms. Merkel harbors secret sympathy for deeper European integration and prefer to see her as breaking a taboo.

Even if that were true, with her time in office coming to an end, any more permanent shift in policy would have to come from her successor, and few believe that the current band of potential chancellors would have the political weight, let alone the desire, to repeat the exercise.

But first she must get a deal, which will not be simple, given that all 27 member countries must agree.

There is significant opposition from northern European nations like the Netherlands and Austria, which oppose grants and want loans to come with conditions about structural change in weaker economies. And there will be a fight over how the money is distributed and monitored.

Still, given the stakes, Ms. Merkel is likely to succeed at finding some agreement — if not this week then before the end of the month, when Europe goes on vacation, no matter how serious the crisis. 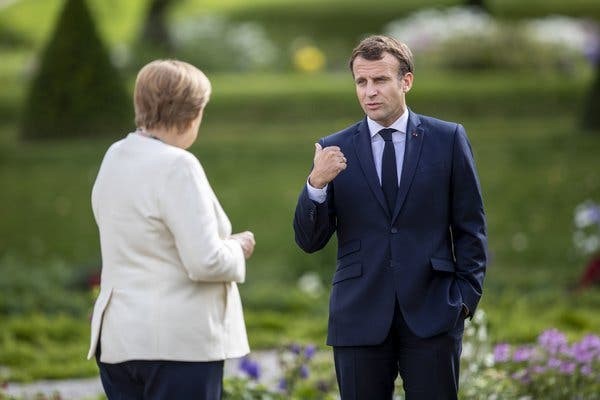 She has made clear that she will not run for office again, and by the end of this year, when Germany’s European presidency ends, her party will have picked a new leader, rendering her a place holder before German elections in 2021.

Within Germany, Ms. Merkel had a deep and lasting dip in popularity following her 2015 decision to open the country’s borders to thousands of migrants and refugees. As she entered this year, her political powers were waning, her party’s support was cratering and even her health seemed in question after a series of shaking episodes at public events.

In Europe more broadly, her reluctance to stand up to domestic pressure during the Greek euro crisis of the last decade cost the bloc dearly. Many, particularly in the south, have never forgiven her.

But the chancellor is riding high again in Germany, having handled the coronavirus outbreak with patience and reason, building on her experience and her training as a scientist.

And there are now lavish hopes in Brussels that she will similarly rise to the moment, finding consensus despite the current rancor.

But Ms. Merkel is still seen as a holdover of an older Europe, one that profited from friendly relations with the United States, a healthy trans-Atlantic relationship, a strong NATO and a global consensus about the virtues of multilateralism and of engagement with a rising China.

Those bedrock beliefs are now in question. As much as she is praised for her steadiness, there is a deep sense in Europe that she is yesterday’s leader, her core beliefs no longer a given in a more rivalrous, competitive world.

The pandemic has provided an opportunity for her to change the narrative. It created political space for her to push Germany in a more European direction, said Simon Tilford, of the Forum for a New Economy in Berlin.

“This is an opportunity to ensure her legacy as a chancellor who bit the bullet and convinced Germans that it’s in their interest to accept greater responsibility for the performance of the European economy as a whole,” he said.

“That’s one reason she’s so outspoken about the existential threat to the E.U.,” he added. “It makes it easier to convince skeptics at home that this is something Berlin has to do for its own interests.”

But trying is not enough, and her prospects for success are unclear — particularly without a successor in place. “It’s a pity she didn’t use her political capital earlier,” Mr. Tilford said. “Because she’ll be gone, and the jury is very much out on how much of her party is happy to move with her.”

Charles A. Kupchan, former director for Europe on the National Security Council and professor of international relations at Georgetown, said that “the pandemic has woken up Merkel and Berlin.” While President Emmanuel Macron of France was trying to articulate a vision for a more integrated Europe, he said, “the lights were out in Berlin — there was no response.”

But the pandemic raised the prospect of a collapse of the eurozone, “with ground zero being not Greece but Italy, a much larger economy, so Merkel crossed the Rubicon,” Mr. Kupchan said.

“But my best guess is that this is not a moment of conversion for Merkel. She is responding to an emergency with emergency measures,” he added. “She does not have the inclination for some dramatic change in the European architecture or the political support for it.” 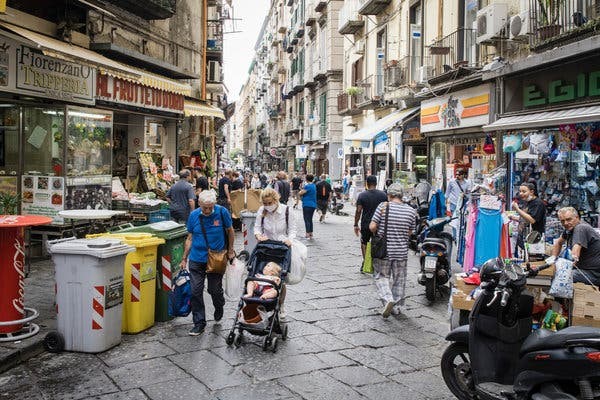 The streets of Naples last month. The proposed recovery fund would most benefit countries like Italy, which were hit hard by the coronavirus pandemic.Credit…Gianni Cipriano for The New York Times

As for her legacy, others seem to care more about it than Ms. Merkel does. She is admired in Brussels, showing a competence and practical knowledge unmatched by other leaders, said Rosa Balfour, director of Carnegie Europe.

“But I’m a bit perplexed about her,” Ms. Balfour said. “She’s incredibly pragmatic, knows her dossiers and how the system works, and can wield soft power. But it’s not clear to me what her vision of her legacy in European politics is,” other than dealing with issues as they emerge. “In contrast to Macron, who goes on about this vision of Europe that no one shares, she doesn’t really have one.”

You can find the original article in The New York Times.