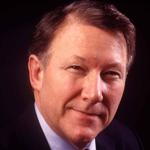 Contributing Editor to The Washington Post  since January 2010, after serving two decades as Associate Editor and Chief Foreign Correspondent. He has served in a variety of reporting, editing, and opinion-forming roles since joining the newspaper in 1966. He was awarded two Pulitzer prizes and other journalism honors. He began his journalism career as a reporter with the Rock Hill Evening Herald in 1960 while still in college. He is the author of a book, South Africa: Civilizations in Conflict, published (1972). He graduated with an A.B. in Journalism from the University of South Carolina and he has done graduate work at the University of Aix-en-Provence and Columbia University.