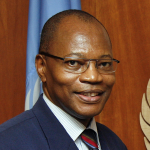 Mohamed Ibn Chambas of Ghana is, since 12 September 2014, Special Representative of the Secretary-General and Head of the United Nations Office for West Africa and the Sahel (UNOWAS). Mr. Chambas has an extensive experience after a long and distinguished career in both international and governmental forums. Before joining UNOWAS, Mr. Chambas was the African Union-United Nations Joint Special Representative for Darfur and Head of the African Union-United Nations Hybrid Operation in Darfur. From 2010 to 2012, Mr. Chambas was Secretary-General of the African, Caribbean and Pacific Group of States.  Prior to that, he served as President of the Economic Community of West African States (ECOWAS), from 2006 to 2009, and Executive Secretary, from 2002 to 2005. A former Member of Parliament of Ghana, Mr. Chambas served as Deputy Foreign Secretary of Ghana in 1987 and Deputy Minister for Education in charge of Tertiary Education from 1997 to 2000.