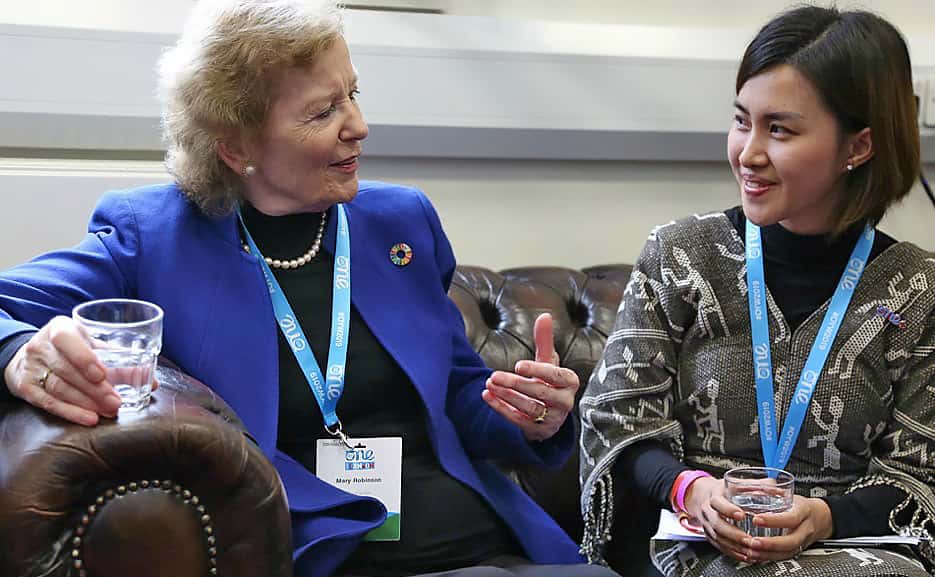 Mary Robinson, chair of The Elders, an organization of eminent leaders, attending a youth world summit in London, 2019, with Manoly Sisavanh of the Wildlife Conservation Society in Laos. What do older statespeople and those ready to inherit the earth feel about the UN on its 75th birthday? That it has averted a third world war so far, but that it must also prevent another one: climate catastrophe. THE ELDERS

Seventy-five years in and a whole different world later, the UN is celebrating its past, present and future, and to encapsulate the anniversary, PassBlue has produced a special podcast episode, “The Elders and the Youth.” The episode, months in the making, features interviews with a wide range of former heads of state, diplomats, UN officials and young globalists, all of whom were asked what the UN has accomplished since 1945 and what the post-pandemic world should — or could — look like.

With the Covid-19 pandemic destabilizing the already-fragile balance of power at the UN and throughout the globe, the experts and youth weigh in on the organization’s work and reputation, providing lucid commentary and strong opinions on what is right about it but also what is wrong.

Some UN youth delegates are disillusioned with the organization; some elders are desperate for international cooperation; and two Asian scholars believe their region is bound to lead the world soon.

After the signing of the UN Charter in San Francisco and the height of global international cooperation immediately after the end of World War II, the UN started operating with a small but critical role.

“If you look at the Charter of the UN, it’s basically formulated to allow this organization to intervene to stop conflicts around the world from spinning out of control,” said Stephen Schlesinger, a senior fellow at the Century Foundation and author of “Act of Creation: The Founding of The United Nations,” in his interview for the episode. “It basically is a security organization.”

Indeed, when talking about the UN’s history, there is one main achievement many experts in the episode agree on:

“I think it would be pretentious to give all the credit to the UN for the fact that we haven’t had a third world war yet,” said Edward Mortimer, a former communications director for Kofi Annan, who was secretary-general from 1997 to 2006. “But I think it has played its part, and I’m not sure that part has always been recognized.”

Another aspect that experts agree on is that the great powers’ bickering in the Security Council shouldn’t be the only window the public looks at, especially during the UN’s 75th anniversary.

“I think the world knows and sees too often the weak part of the UN, which in my view is the Security Council,” Carol Bellamy, a New Yorker who led Unicef from 1995 to 2205, said in her interview. The world, she added, “fails to fully appreciate the extraordinary 800 pound gorilla of the UN, which is its development and humanitarian capacity.”

That’s an assessment that Sir Richard Jolly, a former deputy director of Unicef, echoes. Sir Richard, who lives in England, thinks the eradication of smallpox is one of the UN’s biggest accomplishments.

“In military security, countries spend lots of money every year on their militaries, whether or not they’re engaged in fighting,” Sir Richard said. “On average, in many countries spending two percent or so of GNP, we should be concerned, as the UN is led with the concept of human security, not military security, to protect against invasions across boundaries. But human security protects people against a whole range of threats, such as viruses, gender insecurity in the home and climate change and so forth.”

Yet, he added, “we don’t think in terms of prevention, and we certainly don’t spend two percent of our GNP each year on such prevention as we do for the military.”

Dr. Joannie Bewa, a youth advocate for the UN Sustainable Development Goals, believes that the focus of UN-African Union relations should be on the list of SDGs: “I see a lot of good alignment and overlapping in terms of priorities, if we can make sure that those alignment and priorities for African countries also remain aligned with the SDGs; or, vice versa, I think the collaboration will definitely go by improving,” Dr. Bewa, who is from Benin, said.

If many people think the UN’s achievements should be assessed through its humanitarian work and related interventions, the politics in the Security Council remain the elephant in the room. This year alone, intensifying anger between the United States and China has paralyzed the Council, contributing to the more unpredictable state of international affairs in the pandemic.

As Secretary-General António Guterres put it: “The world is not yet multipolar, it’s essentially chaotic.”

Although it is unclear what the world will look like once the Covid-19 pandemic is arrested, many experts pretty much say that a new world order is underway, and it could be a turning point away from Western hegemony.

“The last 200 years of Western domination of world history have been a major historical aberration,” Kishore Mahbubani, who has been Singapore’s ambassador to the UN, told PassBlue.

“All aberrations come to a natural end, so we will see the Asian century again, and as Asians become the most successful societies in the world, then they actually have a greater vested interest in a world order led by the United Nations,” Mahbubani said. “I predict that the Asian countries will become the biggest supporters of the United Nations in the 21st century.”

Mahbubani is a distinguished fellow at the National University of Singapore and the author of a new book, titled “Has China Won?” It argues that “since we all live today in an embattled world, where you have challenges like COVID-19, global warming, the US and China should be working together with each other, because if they continue to fight, historians will see them by two tribes of apes that continued fighting each other while the forests around them was burning.”

Justin Yifu Lin is a former chief economist at the World Bank and now dean of the Institute of New Structural Economics at Peking University. He supports Mahbubani’s argument, saying: “China has every intention to work together, because China understand[s] we are a developing country. And certainly, we hope to have further development, and for that, to have a peaceful world, a world that works together to meet the challenges that we face.”

But where does the UN fit into such a “peaceful world”? Thomas G. Weiss, Presidential Professor of Political Science at The CUNY Graduate Center, thinks the UN’s best bet is to shrink and focus on what it does best.

“I suspect as this recession, depression continues, there are going to be lots of other countries besides the US to pull back on various kinds of funding,” Weiss said. “It seems to me that the leadership has to ask some tough questions about what only the UN can do, or the UN can do better than other intergovernmental organizations, nongovernmental organizations or regional organizations, and focus its efforts there. I would see a sort of slimmed down UN doing fewer operational activities and drawing on its comparative strengths.”

With the global order being shaken up by the Covid-19 pandemic and major-power rivalries at stake, Mary Robinson, chair of The Elders organization, sums up her hope for the UN and the entire world, noting that the virus has helped awaken people “on what it means to be human.”

“It’s at the heart of the UN Charter, starting with the words, We the peoples, 75 years ago,” Robinson, an ex-president of Ireland and former UN high commissioner for human rights, said. “We the peoples, 75 years ago, made a step forward in understanding our common humanity through the UN system. And now at the 75th anniversary, we have to renew and greatly strengthen that sense and take our responsibility as citizens of the world.

It’s not just the leaders of different countries, it’s the citizens of the world who have to also be taking responsibility for moving forward.”

Read the original article on PassBlue.