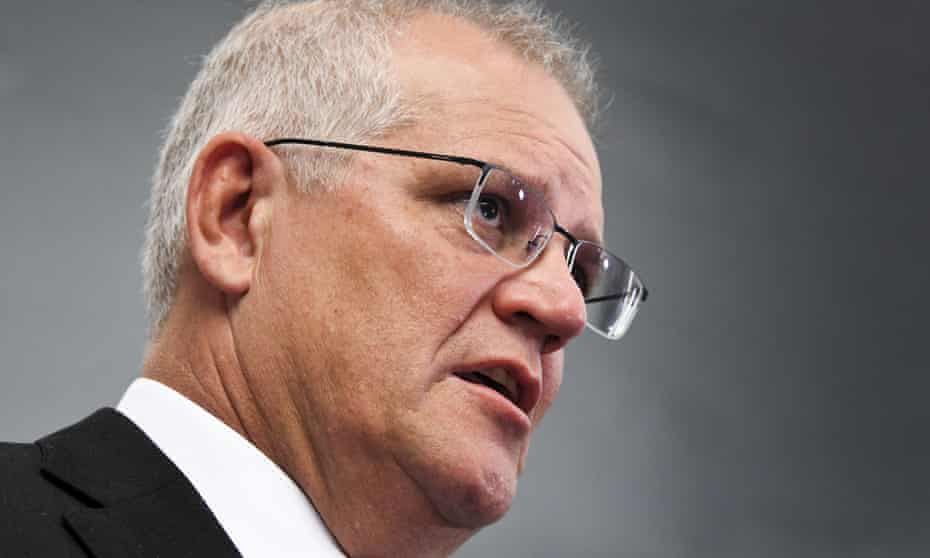 ‘At every stage of the pandemic, prime minister Scott Morrison has had to be dragged into action.’ Photograph: Lukas Coch/AAP

Scott Morrison’s bloody-minded refusal to fund rapid Covid-19 tests is misguided, expensive and dangerous. It is just one more example of the Liberal leader putting his own crude political interests ahead of public safety.

There are no silver bullets to end a pandemic. The public understand that. Vaccines are an important weapon. But only because they let us move from the blunt instrument of citywide lockdowns to a combination of other, more targeted and inter-locking public health measures.

This includes an effective regime of testing, tracing, isolation and quarantine. All these elements must work together.

Morrison’s dereliction of leadership responsibility for Australia’s testing regime, with queues snaking through city streets and rapid antigen tests being hawked online at extortionate prices, is one more addition to the many errors that have come before it.

At every stage of the pandemic, Morrison has had to be dragged into half-hearted action – with catastrophic consequences.

Morrison has been obsessed with picking political fights instead of his government’s core responsibilities like quarantine and aged care. Almost 1,000 Australians have now died in commonwealth-regulated aged care homes that were meant to keep them safe.

In this pivotal stage of the pandemic, it is in everyone’s interest to ensure every Australian, regardless of their income, has access to free at-home rapid antigen test kits. This is because every time a positive case is identified, it provides the chance to staunch a chain of infection and keep bending the curve so that our hospitals aren’t overrun.

Morrison’s myriad arguments against free rapid tests range from the hypocritical to the obscene.

First, Morrison insists the Treasury cannot afford it. This is patently ridiculous. Let’s not forget how Morrison wasted an eye-watering $40bn in JobKeeper payments to companies that didn’t need it – enough to buy every Australian household a dozen tests every month into 2024!

Morrison’s position on rapid tests is ultimately a false economy because mass-testing saves money in the long run. Public hospitals can easily spend more than $100,000 invasively ventilating an intensive care patient, or the chain of infection can be detected and halted weeks earlier using a cheap rapid test.

Second, Morrison points to conventional PCR laboratory tests as fully subsidised alternative. Apart from the mammoth queues to access a PCR test, these tests are much more expensive to taxpayers. For every PCR test conducted by a private laboratory, Medicare is charged $85; by comparison, rapid tests generally cost about $10 (even less when the government is buying millions of units in bulk). Put another way, for every rapid test that displaces a PCR test, taxpayers would save at least $70.

Since 1991, successive federal governments have funded free breast and cervical cancer screenings. John Howard expanded on these programs by including at-home bowel cancer tests. The fact that Morrison’s own government is conducting a feasibility study on free lung cancer screenings suggests he has no objection.

Fourth, the government warns it cannot possibly meet Australians’ insatiable appetite for free tests – a statement that is grounded in a deeply elitist perspective on public health behaviours by lower income Australians.

Federal health minister, Greg Hunt, and Morrison talk down to Australians as though they are either hypochondriacs addicted to shoving cotton swabs up their nostrils, or charlatans determined to cheat government programs. They suddenly insist on price signals to ensure people don’t seek help unless they are truly desperate.

Morrison might find this hard to imagine, but not every household has an extra $25 saved for a rapid test when they need it. This is a recipe for massive undetected spread among those Australians least able to pay.

Finally, Morrison says he won’t “undercut” businesses trying to make a buck out of these tests. This is a total abrogation of responsibility, leaving public health at the mercy of price-gouging companies who – unlike Morrison – listened to experts’ warnings of a looming spike in demand.

The fundamental principle of Medicare is that Australians deserve access to healthcare based on their needs, not their ability to fulfil the needs of the market.

If Morrison wants to ensure Australians can find rapid tests at their local shops, that’s good; he should involve those businesses in delivering publicly funded testing kits. But since Morrison’s stated motivation is to avoid “undercutting” their profits, it seems he’s forgotten who he works for.

One of the few things that unites most Australians is our revulsion at the hideous inequities of the American health system; Morrison’s apparent fondness for mingling business with healthcare suggests he doesn’t share that view.

Why then has Morrison taken this hypocritical and unsustainable position? I suspect three reasons.

Morrison may be trying to ease fears ahead of the election. Australians are watching rising case numbers with trepidation and soaring positive test rates – now more than 20% in most states – suggest there are many more cases lurking beneath the surface.

Morrison also knows voters have now seen through the myth of Liberals being superior economic managers. Morrison is now the biggest-spending postwar prime minister with record debt and record deficit.

National debt is set to reach $1.3tn – more than seven-times the Labor government’s supposed “debt bomb” of $189bn in 2013 – equivalent to 55% of GDP, compared with 12% when we left office. Morrison’s performative austerity on rapid tests is a feeble attempt to regain some fiscal credibility.

Finally, Morrison now stakes this public position on a thread-bare ideology of “personal responsibility”. He’s borrowed this from his British counterpart, Boris Johnson, who thought he could politically skate through the latest UK debacle. But it’s also political code language for a Darwinian survival-of-the-fittest contest in which the weak, the poor and the vulnerable are cast aside.

Perhaps that’s what Morrison really meant when he said of rapid tests, “someone’s always going to pay for it, and it’s going to be you”. Once we had Medicare. Now we have MorrisonCare.

Read the original article on The Guardian