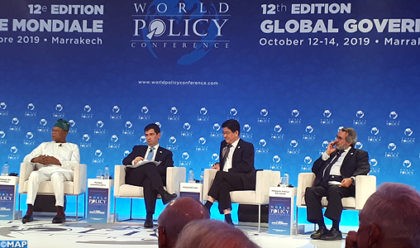 The security and stability of the MENA region and the Sahel require the adoption of a “holistic” and “multidimensional” approach based on cooperation and integration for sustainable development.

The observation was made by researchers and experts in geopolitics who were taking part in a plenary session on the “Middle East / North and West Africa” held Monday, the last day of the 12th edition of the World Policy Conference (WPC), convened in Marrakech Oct.12-14.

Mohamed Ibn Chambas, Special Representative of the UN Secretary-General and Head of the UN Office for West Africa and the Sahel, (UNOWAS), stressed that security is being undermined in this region, which has been weakened by several challenges, including the rise of terrorism and violent extremism.

The security approach alone will not be enough to ensure stability in the Sahel. It must be accompanied by an integrated approach based on cooperation, he said, calling for strong partnerships instead of peacekeeping, interference or intervention.

A collective commitment is critically needed for this region so that it does not become a highway of terrorism and a hotbed for spreading extremist ideologies, he insisted.

He indicated that the Sahel region is experiencing community conflicts because of the infiltration of terrorist groups and the deterioration of the security situation in this part of the Continent.

The Economic Community of West African States (ECOWAS) is strongly committed to this region through various actions in several areas of cooperation, particularly with partners from the European Union and the United States, he said, adding that this multidimensional cooperation should focus more on economic and sustainable development at the service of local populations.

For his part, Vice President of the China Institute of International Studies Dong Manyuan called for strengthening peace and security in the MENA and Sahel region, through further cooperation and commitment, underlining the constructive role the international community can play in this regard.

The creation of a security environment to make the region more stable and peaceful inevitably depends on internal economic development, he said.

China wants to contribute to the development of the Middle East, he insisted, highlighting the “Belt and Road Initiative”, which aims to establish a high-level cooperation to improve the lives of the people and promote sustainable development in the region.

The President of the Gulf Research Center (Saudi Arabia), Abdulaziz Othman bin Sager, surveyed the situation in the Middle East, highlighting the need for a real commitment by the international community to de-escalate tensions in the region and ensure its stability.

He insisted that this commitment must be constructive instead of becoming a kind of interference or intrusion in the internal affairs of the countries of the region.

The World Policy Conference, incepted in 2008, seeks to contribute to the promotion of a more open, prosperous and just world, which implies a permanent effort to understand the reality of the forces involved and their interactions.

It is also a platform to reflect on the peaceful adaptation of the organization of interstate relations at all levels, in the respect of the culture and the fundamental interests of each nation. It offers a space for reflection and dialogue around the major issues of global governance, while allowing the development of enduring links.