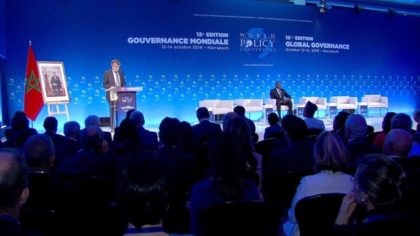 The 12th forum of World Policy Conference taking place in Marrakech has sounded the alarm over global uncertainty entertained by several political and economic crises including the US- China trade war that it warned will slow the development of several African country.

Montbrial indicated that world has become ever uncertain because of various crises taking place around the world.

The trade war between USA and China, the Gulf conflict between Saudi Arabia and Iran, expansion of terrorism in the Sahel region as well as the creation of the Hindu state in India are among several other political crises around the world that endanger world peace and economic growth.

The trade war between the two world giants, Montbrial warned, will cripple the economic growth of several African countries which are finding themselves sandwiched between the two top global economies.

The tariffs and sanctions game between the US and China, WPC’s Chairman notes, will see a decrease in the demand of mineral resources and therefore a cut into the revenues of countries which dependent on mineral and oil resources. These resources constitute the main contributors to the national budgets of most African countries, he recalled.

The 12th edition of the WPC to conclude Monday night focused on the issues of technology in society and politics, cyber powers, cyber threats, energy and the environment, as well as economic and political prospects, direct investment and trust, in addition to the future of the international monetary system, the weapon of law and globalization.

The WPC aims to contribute to the promotion of a more open, prosperous and just world, which implies a permanent effort to understand the reality of the forces involved and their interactions, and to reflect on the peaceful adaptation of the organization of interstate relations at all levels, in the respect of the culture and the fundamental interests of each nation.

It also offers a space for reflection and dialogue around the major issues of global governance, while allowing the development of lasting links.