The Principality of Monaco

The Principality of Monaco is an independent and sovereign state on the Côte d’Azur. Overlooking the Mediterranean Sea, it lies halfway between Nice and the border with Italy and therefore enjoys a particularly pleasant climate.

It is the second smallest independent State in the world, after the Vatican.

Monaco is a city-State that is open to the world – with almost 125 nationalities being represented there. Among the residents, 28% are French, 17% Italian and 6% British. The official language is French but Italian and English are also widely spoken. The traditional Monégasque language, Monegù, is spoken by the older generations and is also taught in the local schools.

From time immemorial, the Rock of Monaco has served as refuge for a number of populations. The first inhabitants to settle in sedentary communities were Ligurians who emigrated from Genoa in Italy. The future Principality was founded on 10th June 1215, when the Genoese Gibelins family placed the first stone of the fortress which is today the Prince’s Palace. Dependent on the Republic of Genoa, of which the Grimaldis were one of the patrician families and with a relative degree of autonomy since 1297, the Principality became a constitutional monarchy in 1911. It has been ruled since 2005 by the Sovereign Prince Albert II of Monaco. The history of Monaco has been closely associated for the last 700 years with that of the Grimaldi family.

The Principality offers numerous attractions and has become a genuine crossroads of trade and influence. 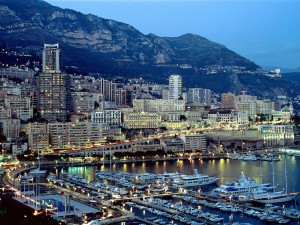